IKEA made an announcement a couple days ago stating that it would be discontinuing the Expedit and replacing it with the Kallax. The decision shocked many and made four pieces of furniture in my house cry. Yes, I own four Expedits. At one time I even owned five. I can explain.

First of all let me apologize and warn you that some of the pictures you are about to see are from before I was a blogger. The shots are not staged in the least bit. The furniture is in the background and the chubby baby faces are in the foreground. One of my rooms even had red walls. Prepare yourselves.
I first bought an IKEA Expedit about 8 years ago for our previous homes’ office, back when we had a home office. It was the 5 x 5 version in white and held all of our office supplies, books, cookbooks etc. We had tall ceilings so this height was perfect. It stayed neat looking and relatively organized. Again, I apologize for the picture of a picture. 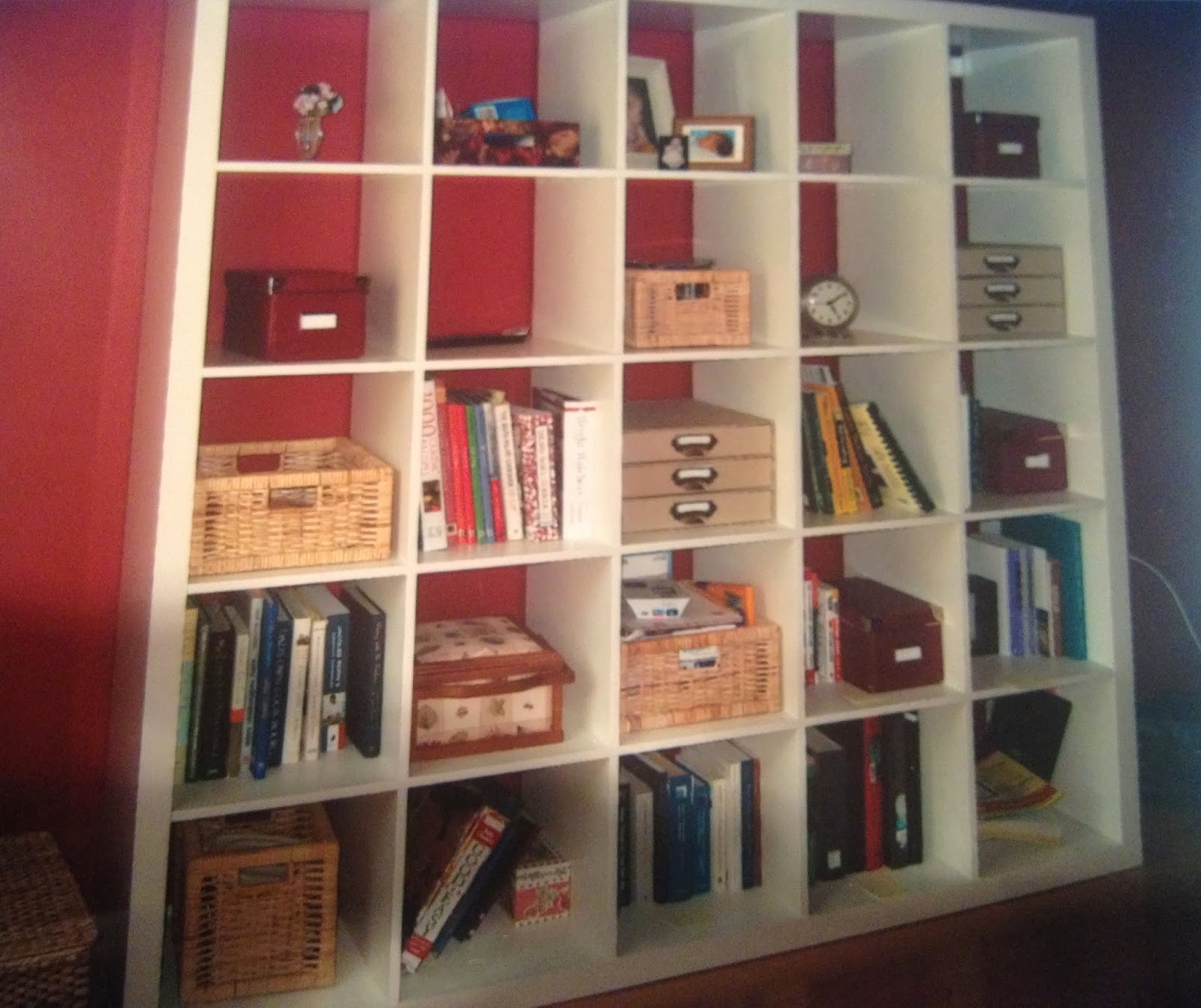 It worked so well in that room that we decided to branch out. We had a play room in our previous home for all the toys, books and craft supplies. I purchased two 4 x 4 units and placed them side by side.  Again, excuse the chubby baby in the forefront. And yes, his cheeks were that yummy.
I purchased the clear drawers from IKEA so my son and daughter could see the toys they wanted. Plenty of room for books, a hamster cage, paints and play dough. The list is long. I even left two cubbies on the bottom empty so that my son could park his ride-on toys. The room cleaned up so quickly with all the available storage. The two units didn’t go all the way to the ceiling so there was room on tops for some picture frames and accessories. It was perfect. 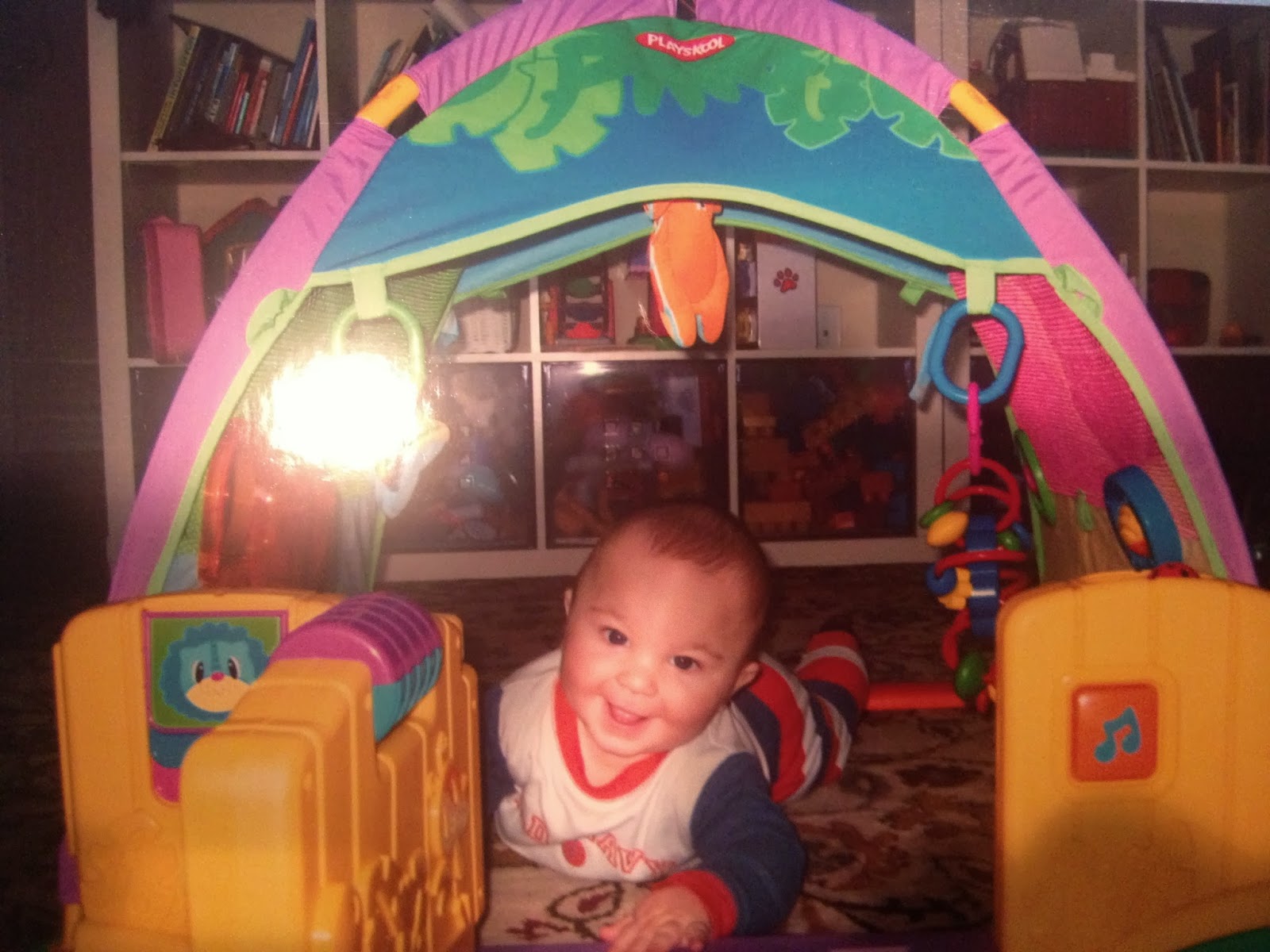 We then added a third child to the mix and moved into our current home. The three units moved along with us. They held up great in the move and found new places to live in our new home. The 5 x 5 unit was originally going to go in the basement for storage. On moving day we found out that was impossible since it wouldn’t fit down the stairs. I moved on to Plan B and placed it in our playroom. I ended up purchasing a fourth unit and placed them catty corner on one side of the room. They were again filled with all the toys, books and craft supplies. The plastic storage bins had started to crack so I replaced them with bins from Target which fit perfectly. 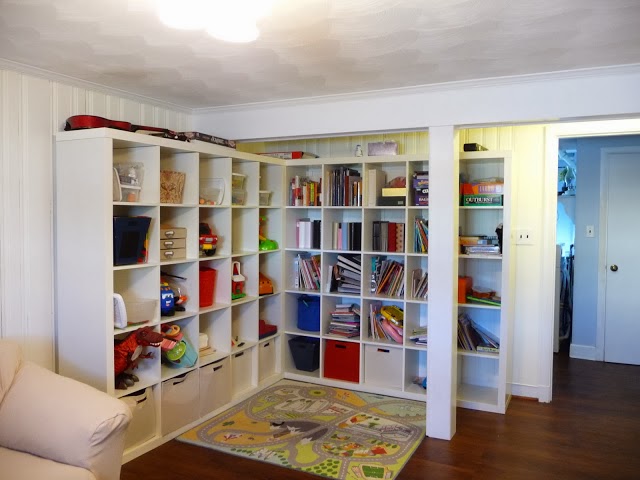 The two 4 x 4 units were split up. One went into the basement for pantry storage. The other went into the bedroom that my two sons were sharing. Their room had a huge closet which I felt was not being used. I ended up taking off the sliding doors and installing the Expedit inside the closet. Best thing I’ve ever done. There is still room on either side of the closet for each boy. The Expedit itself holds clothing and books. I again used the Target bins as drawers. I don’t see this setup changing any time soon. 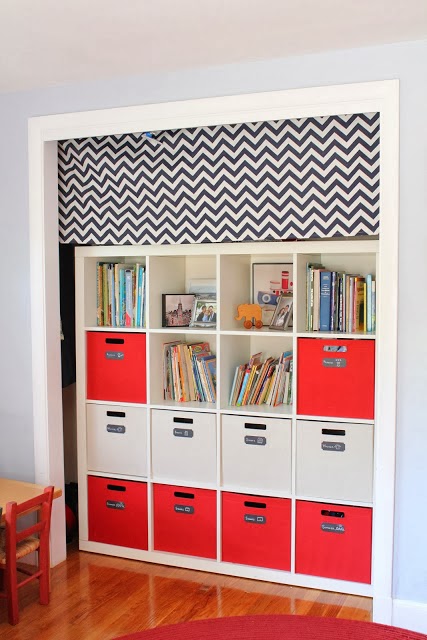 So we were happy and organized with our four IKEA Expedits. Then I hit the jackpot which passing a yard sale one day. A 2 x 4 Expedit in white for $5. I paid the man my five dollars, deposited my kids at home and came back with an empty car to pick it up. I was having a problem with the unused storage clutter that my daughters’ closet was becoming. I removed the doors from her closet and installed the Expedit to hold toys as well as her dollhouse on top. I then placed a tension mount curtain rod along the front and added some decorative curtains. It was a great setup as well. I have no pictures so you’ll have to take my word on that.
Things stayed that way for a while until we finished our basement. We created a laundry room downstairs so all of a sudden I had empty space in my mudroom/laundry room. I now had a dedicated mudroom so the 4 x 4 unit that was downstairs was moved up to the mudroom as soon as the washer and dryer were out of the way. 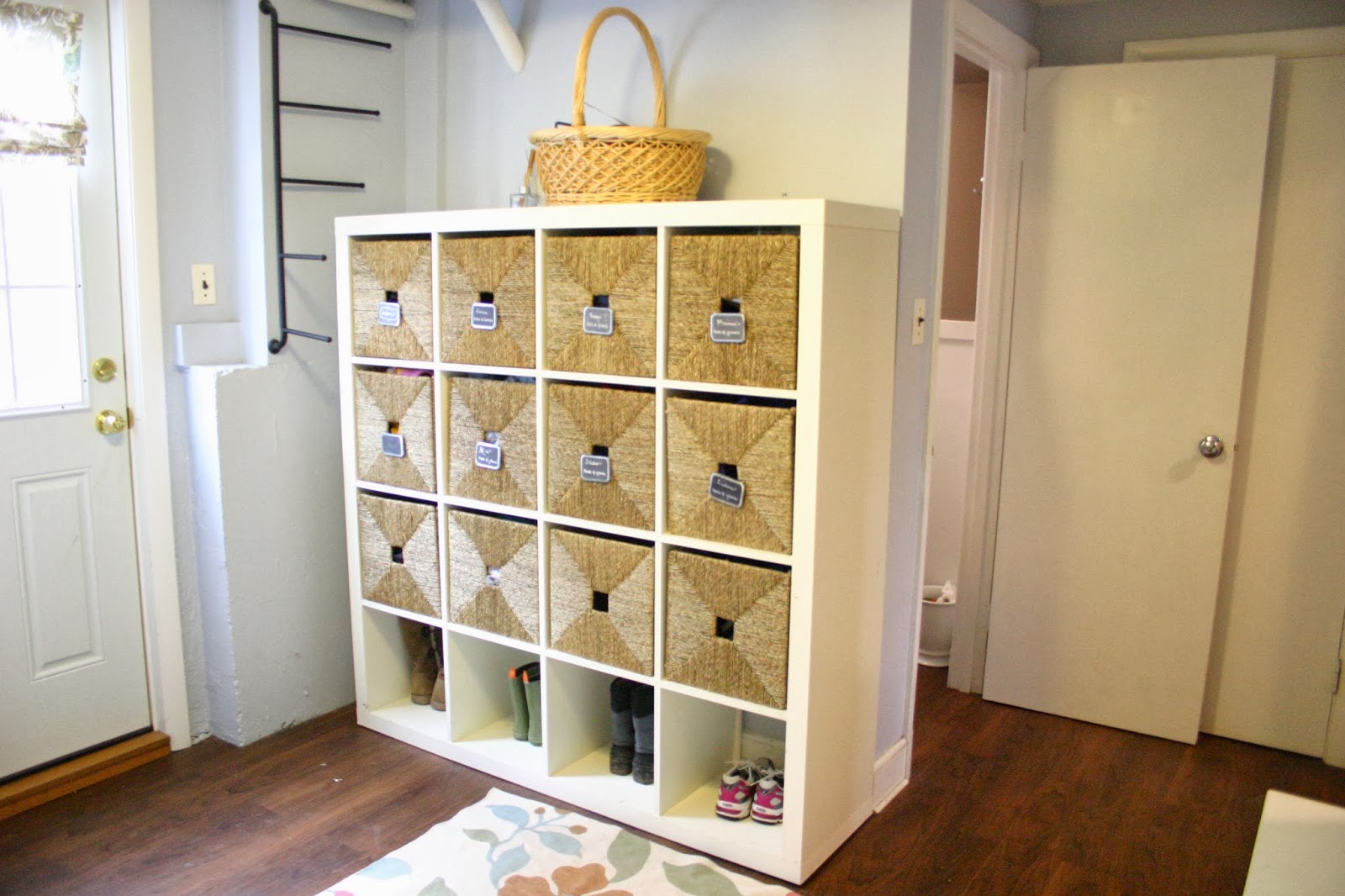 I purchased the Knipsa baskets from IKEA for this space. It wasn’t a kids’ space, it was out in the open and I wanted something a little nicer looking. I added some labels to a couple of the baskets since everyone has their own basket for gloves, hats and snow pants. When the warmer months come around these will be switched out for bathing suits. Our dog has her own basket as well. The rest of the baskets hold things like umbrellas, beach towels, and even one drawer for small gifts that haven’t been distributed yet.
During our renovation the playroom became a hallway/guest room. One of the 5 x 5 units that was in the playroom was moved into the garage for storage. Again, sorry for the horrible picture. This is reality. It holds everything from Bounty to hockey skates. Not exactly organized but a storage workhorse. 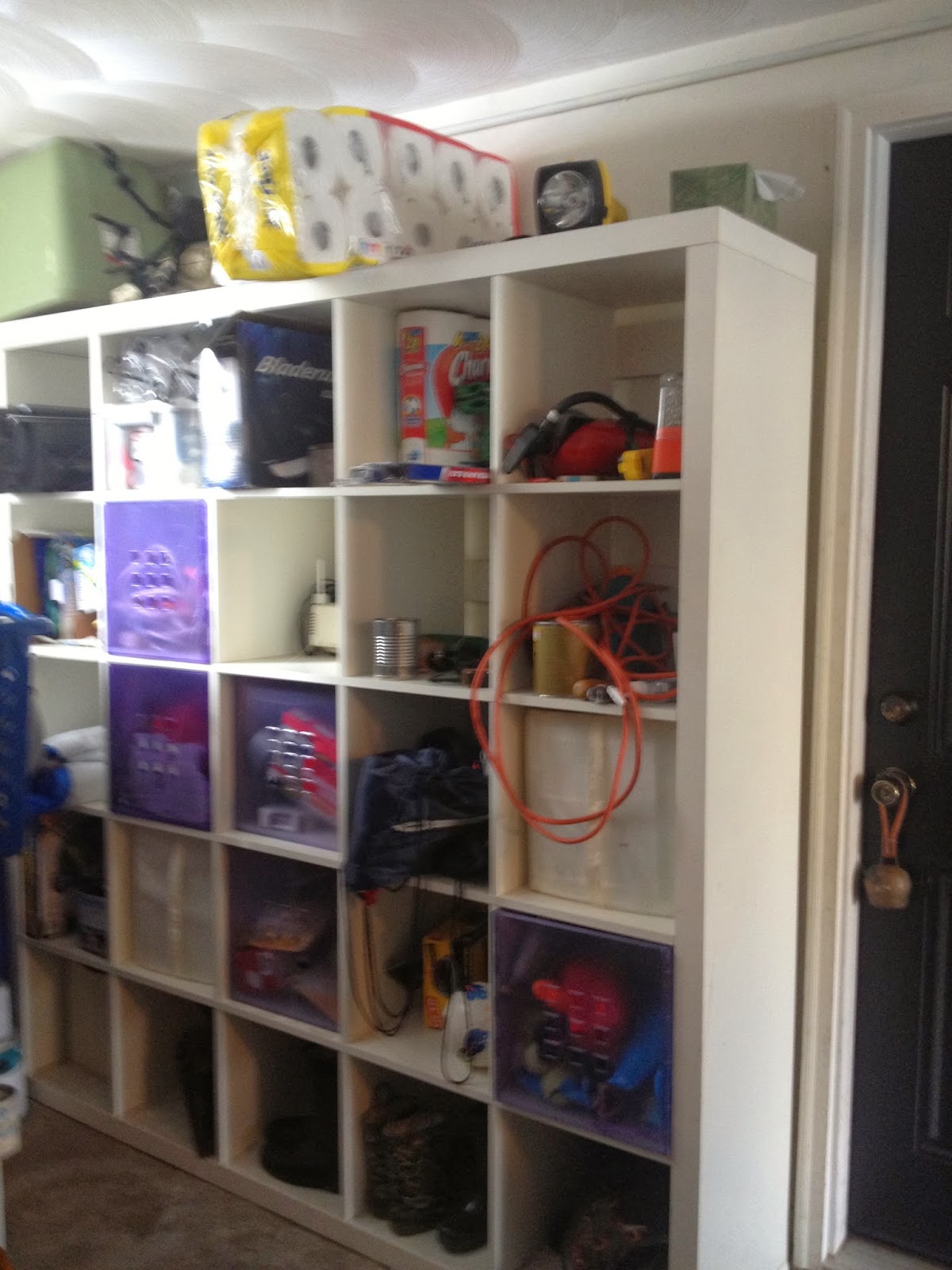 The 5 x 5 that was left behind had a walk in closet built around it. It is now part of a multipurpose closet in the new guest room with everything from sleeping bags to our Wifi printer. 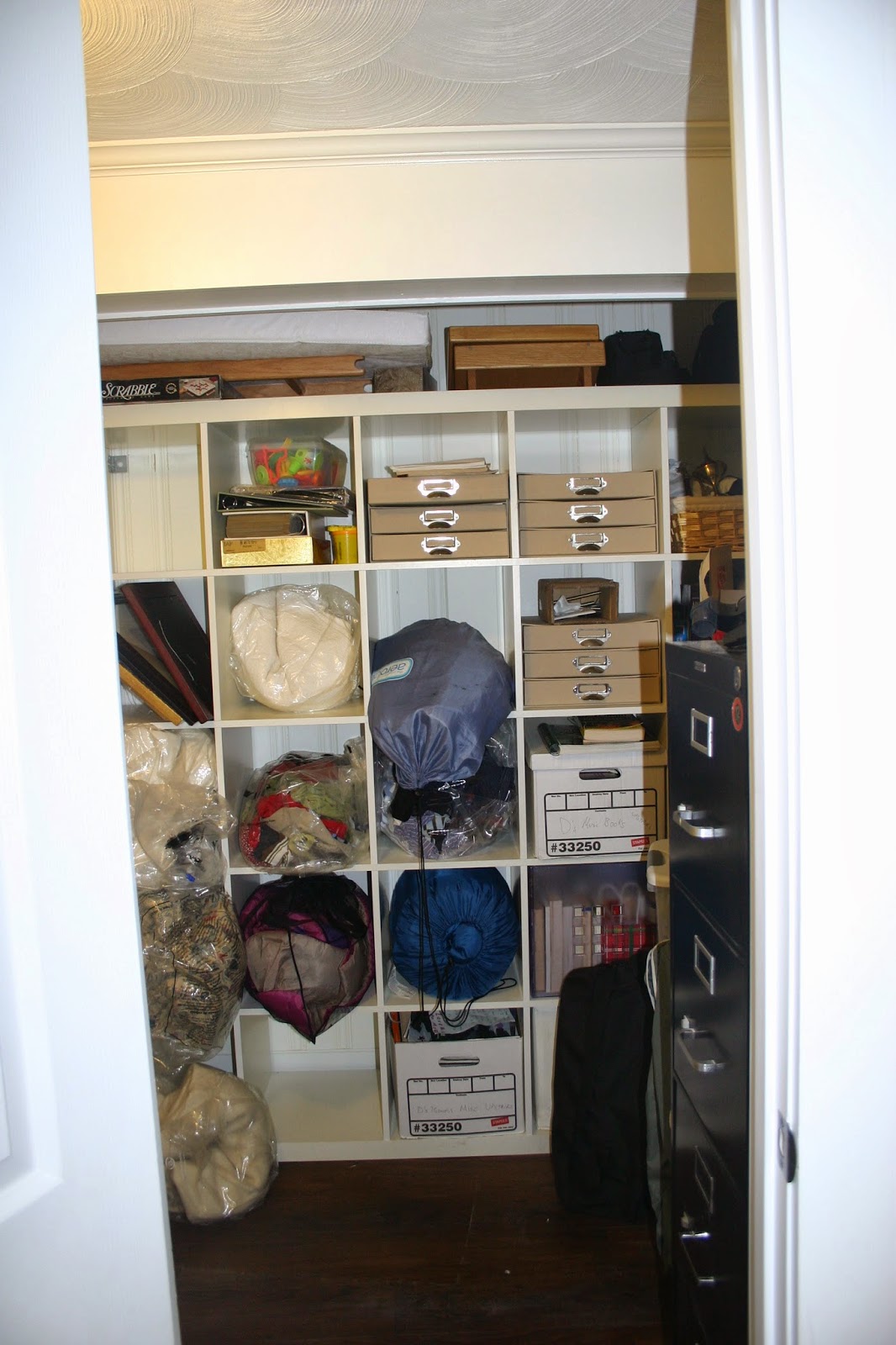 Once I began work on my daughters’ closet the 2 x 4 unit that was there went to a closet in my sisters’ house. The closet was transformed into a cloffice with the help of some other IKEA pieces. Again we were down to four Expedits.
For storage, multipurpose rooms and families on a budget it is the best piece of furniture you can buy. Ours have moved from office to playroom to bedroom to basement to garage to mudroom. We’ve had them in every room in the house except the kitchen, living room, dining room and bathroom.
The Expedit is such a universal piece. Clean lines that blend in with any room and any style. Just do a search for it online and you’ll see the variety of ways people have used it and hacked it as well.
The Kallax looks similar enough, but it is not the same.