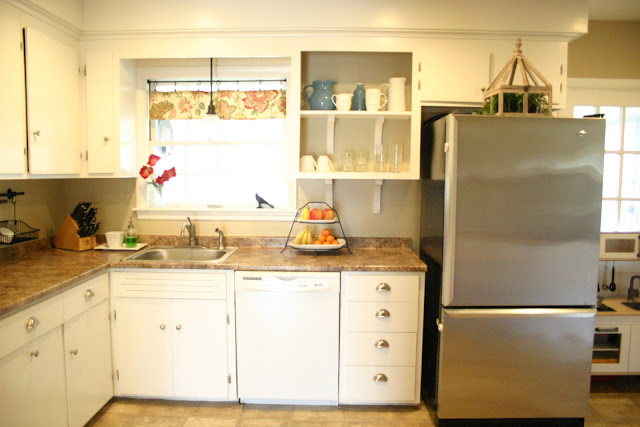 The next installation of my house tour is here. Today I’m sharing my kitchen with you. First I’ll give you some background. This is the original kitchen in my 1950’s home. The wood cabinets are in good condition but all the doors are different sizes. They had been painted white and all the hardware was updated, which helped.The drawers are huge but not the kind that slide in and out easily. The bruises on my sides can attest to that. You have to shove these things back (and make sure there are straight) to get them into place. The floor is vinyl tiles which were updated before we bought the house. The appliances were also updated before we moved in by the previous owners which was great. The only problem was that they purchased the cheapest appliances on the planet. Not so great.
We brought our own refrigerator so I had no problem putting the other one in the basement. The oven is ok. It does what it is supposed to do but I’d happily replace it tomorrow. There was no microwave. Not good either. Then there is the dishwasher. We actually have to turn up the volume on the television at night when the dishwasher is working. It is loud! One day I will have a whisper quiet dishwasher.
The lighting was very poor in the kitchen as well. One pendant hanging over the sink and a ceiling mount fixture in the middle of the kitchen. That was it. With only one window letting in light it makes for a very dark kitchen. The white cabinets helped brighten it up a bit but there didn’t stand out too much from the “builders beige” paint. Here is the kitchen before we started any work on it… 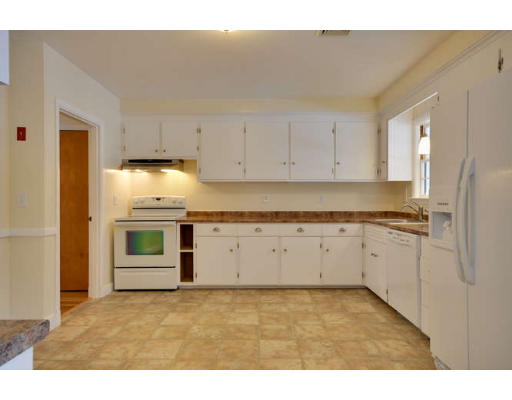 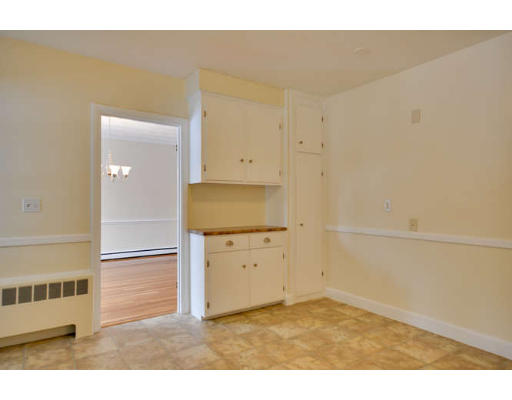 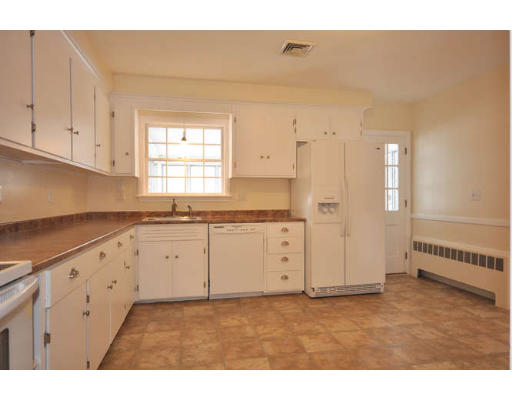 At the time that we moved we had enough in our budget for one major renovation. The contenders were the basement and the kitchen. We choose to do the basement over the kitchen for a couple reasons. First of all by doing the basement we could add some square footage onto our home. 400 square feet to be exact. We were adding a designated play area for the kids which would free up some of the other rooms in the house from toys and clutter. We were also moving the laundry room down there which gained us some space in the mudroom. It could now be just a mudroom and not a mudroom/laundry room/ dirty laundry dumping ground.
I would have loved a new kitchen but decided to be practical. I have young children who still ride around the house on tricycles and have races with matchbox cars. They would have killed my new kitchen within a month. So I decided to work with what I had. Before we even moved in we needed to address a couple things. The lack of lighting and the stove situation.
One pendant light over the sink and a ceiling mount fixture in the middle of the kitchen were not enough. We had our electrician install 5 recessed lights which lined up the the counter tops, running from the stove to in front of the sun room door. The ceiling mount fixture was removed altogether and a hanging pendant was added over the area where our kitchen table would eventually go. We now had a brighter space with two new fixtures to warm it up.
The stove issue at first was one of safety. If you look closely at the first picture of the original kitchen you can see that the stove is right next to the wall, under the light switch. With a house a young children I didn’t like that setup. We cut into the counter to the right of the stove and slid it over. A tray cabinet was then built to the left of the stove and the counter was replaced on top of it. The cabinet on top of the stove was cut from the bottom and a venting microwave was added. To the left of the microwave a display shelf was created.
The only other big change that was made before moving in, besides painting, was re-purposing the cabinets on the side of the kitchen near the dining room. There was no pantry so the original broom closet was transformed into one simply by adding a shelf track with four laminate shelves. Having a huge pantry in the basement makes up for this one being so small. 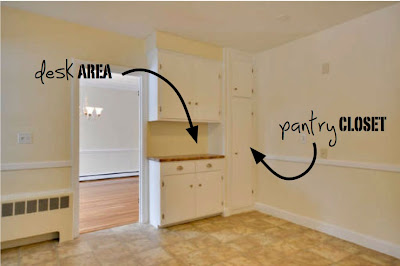 The rest of that corner of the kitchen became an office space. The cabinets above contain my cookbooks, stationary, pencils for homework, glue sticks, smalls tools like screwdrivers, etc., menus, craft supplies, the list goes on and on. Everything is organized in bins and boxes. The two drawers below are divided into the junk drawer and the battery/charger drawer. Utensil caddies keep things organized. The cabinet underneath had some behind the scenes work done as well. I had the electrician bring in an outlet (from the other side of the wall in the dining room) in order to have an outlet inside the cabinet. A hole was then cut into the counter top. This is where the phone charger base is. The printer was under there as well until we purchased a wifi printer. Now the space underneath is filled with coloring books, crayons, markers, paper and a large bin of fingerprints. The kids can reach it easily and it is right next to the kitchen table so that the markers stay in the kitchen!
The kitchen was then painted Benjamin Moore Shaker Beige with Bright White going below the chair rail, and we moved in. After that it was the pretty stuff that was tackled. I made a valance for the window above the sink, removed some cabinet doors to create the look of open shelving, added a wall storage system to free up my counters, strategically decorated the top of my fridge, created menu central and added artwork in the form of plates to the wall. Whew! Here what it looks like all pulled together… 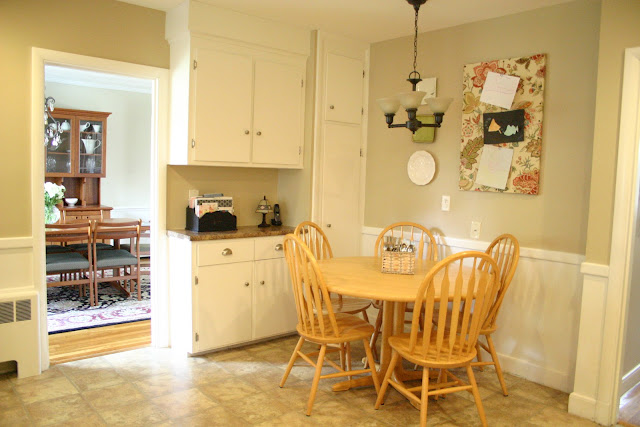 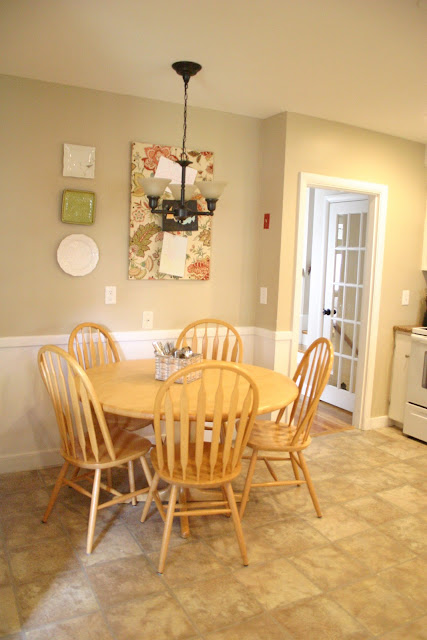 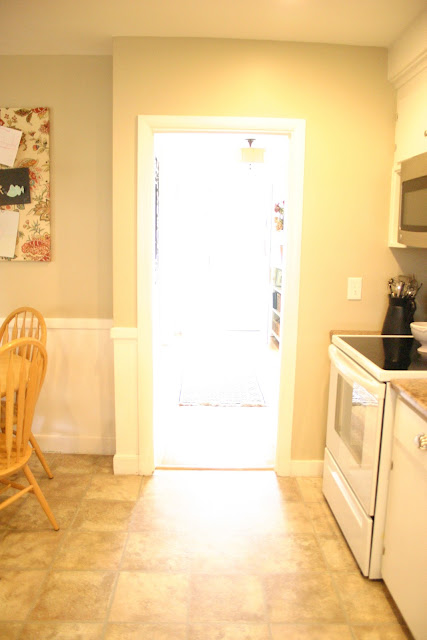 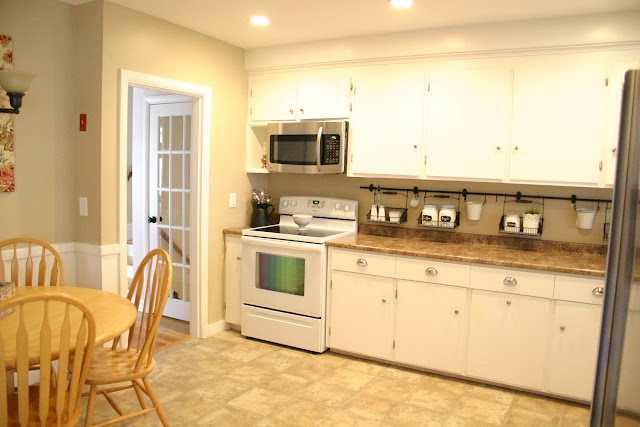 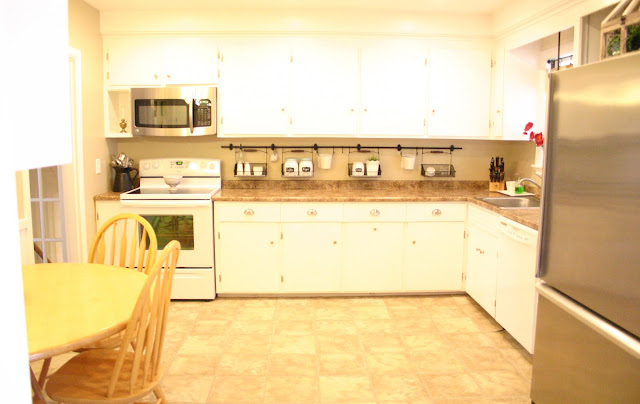 I’m a big fan of working with what you have. My kitchen is probably my biggest example of that. I’m fine with it, for now. Don’t get me wrong, I know exactly what my “one day” kitchen already looks like, just check out my Pinterest board here. I see white cabinets, a open wall to the sun room, an island to eliminate the need of a kitchen table, a huge wall of storage and appliances that are actually centered. Have you noticed where my sink sits compared to the window above it? One day…
linking up at…
Thrifty Decor Chick before and after party