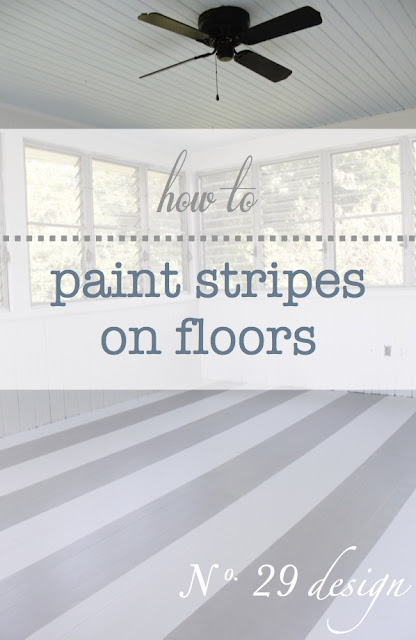 The plans for my porch all began with one idea in mind. Before I knew what colors I would use or what fabric I wanted for my pillows or even what furniture those pillows would be sitting on I knew one thing. The floor would be striped.
This is a high traffic area. We are constantly coming in and out from the back yard onto the porch, which is off the kitchen. Between three kids and a dog I want this floor to be able to take a beating. I had not touched the porch since moving in three years ago and the wooden plank floors were a collage of red, brown and green paint. 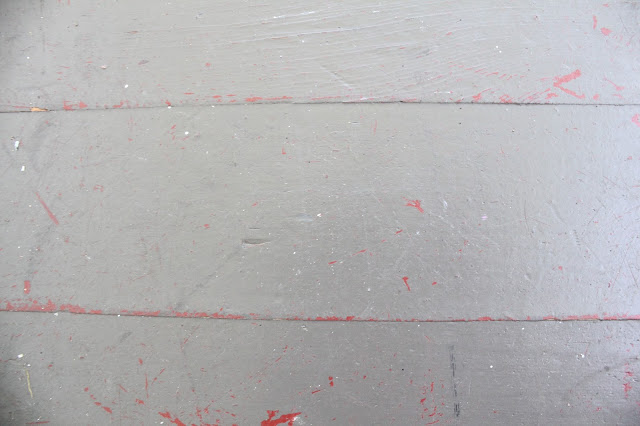 I did a lot of research and decided on my primer and paint. First I would use Benjamin Moore Fresh Start Primer followed by Benjamin Moore Floor and Patio paint in Decorator’s White. This paint is meant for all interior and exterior floors, decks, stairs, concrete as well as masonry surfaces. My porch is enclosed so I wasn’t really worried about rain or snow, just colder temperatures during the winter months. 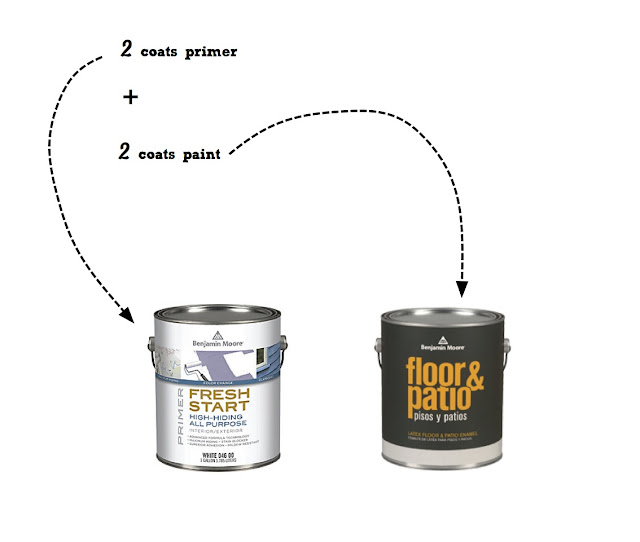 And so I got to work. I emptied the porch and did a thorough check on the entire floor. I filled in some holes with wood filler and sanded those down. I then vacuumed all the dust and buildup until I had a smooth clean surface. Then came the primer. My plan was two coats primer to make sure I covered up every bit of brown, red and green that could possible show through. Using a 9 inch by 3/8 inch nap synthetic roller cover on my fancy schmancy extension pole I rolled out two coats of the primer. 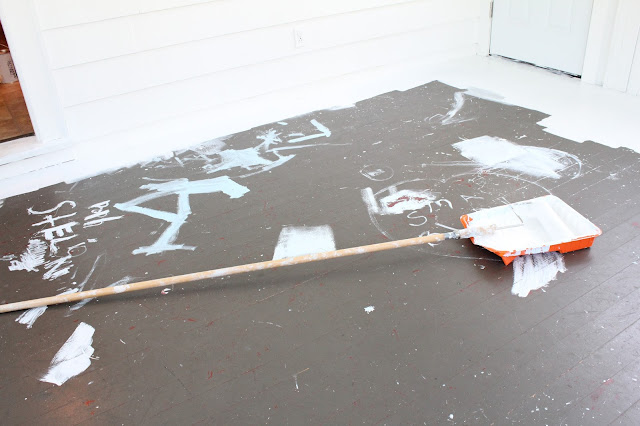 I made sure to start in the corner farthest from the door. I rolled a frame around the edges of the room first and then filled in the rest. Once the first layer was done I waited 5 hours before applying the second coat. I then let the primer dry overnight.

Tip Number One which  I read online was to put the roller brush in a plastic bag between coats. I actually put it in the refrigerator as well. I was told later by my dad an expert that the refrigeration part was not necessary. Regardless my roller did not dry up and I was able to keep painting right where I left off.

The next day I started painting the floor and patio paint. I decided on two layers of this as well. This type of paint is much thinner than regular paint or primer. I felt like one layer would not have been enough coverage. Tip Number Two which I again found online and am so glad I actually did was to paint my two separate layers in opposite directions. The floor boards run from left to right on my porch. I knew I wanted my second layer to follow the direction of the floorboards so I painted my first layer perpendicular to that. The reason this was such a great tip is that I never noticed how many little holes and gaps I missed with the primer. By looking at the floorboards in a different direction I felt like they really got the coverage they needed. There are no large gaps in between my boards so I wanted a nice even coat. If your floorboards are spaced apart this may not be the case for you.
After the first layer I waited 24 hours before doing the second layer. Once the second layer was down I waited another 24 hours before I did the next step. Here’s what it all looked like after two coats of primer and two coats of paint… 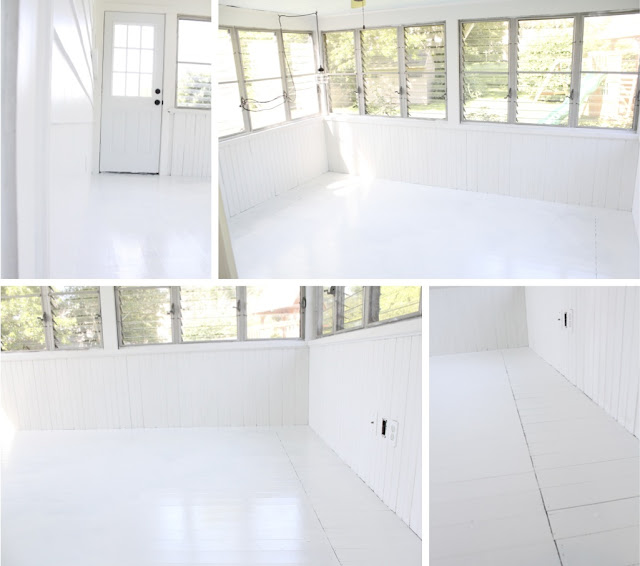 My next step was to add the stipes. If you are painting your floors and not planning on doing stripes then you are done. If you are as determined to have stripes on your floor as I am, read on…
I placed the white down first so that I could easily paint the darker color over it. Depending on your color choices for your own stripes this is the best route to take. By the way, color number two is Benjamin Moore’s Coventry Gray, a warm shade of gray that makes me extremely happy. Especially when mixed with Decorator’s White.

After deciding to use the floor boards as my guide I determined the width of each stripe. I did not plan on dividing the room up equally in stripes so I ended up having 11 stripes in total, 6 white and 5 gray. Each stripe is 13 inches wide. The last white stripe against the outside wall would be a couple inches shorter. This is not a problem for me since it is underneath the wicker sofa and out of sight. The stripes nearest to the doors are all even in width and much more visible. I also planned on the stripes nearest to the wall to be white. This way the white seemed to be the dominant stripe with the gray stripe as the accent stripe. Since I’m happy with the way it turned out I’m going to assume this was a good decision on my part.

I began laying the painters tape down following the lines of the floorboards. I measured every so often just to make sure they were straight and even. I was laying out the tape to be filled in with the Coventry Gray stripe. I begin making “x’s” with the painters tape on the white stripes. This came in handy later on when I was painting. I didn’t have to count out the stripes to make sure I was painting the right one. I just did a quick check to find my “x” and make sure I was not painting on it. 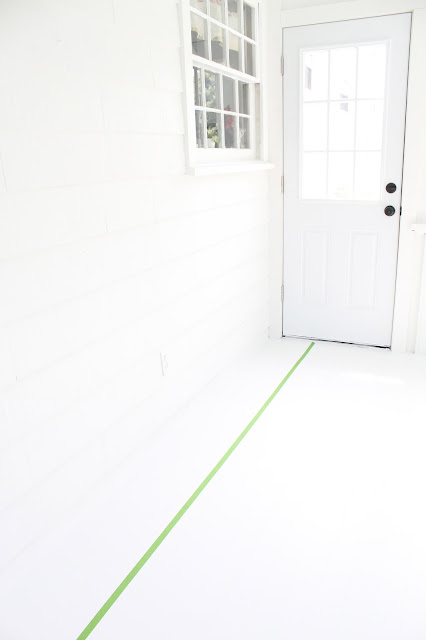 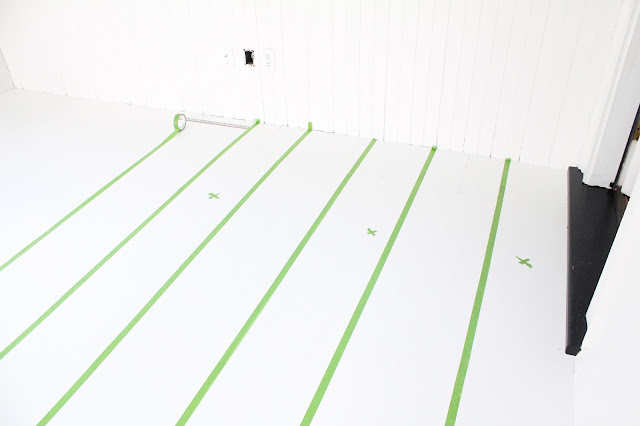 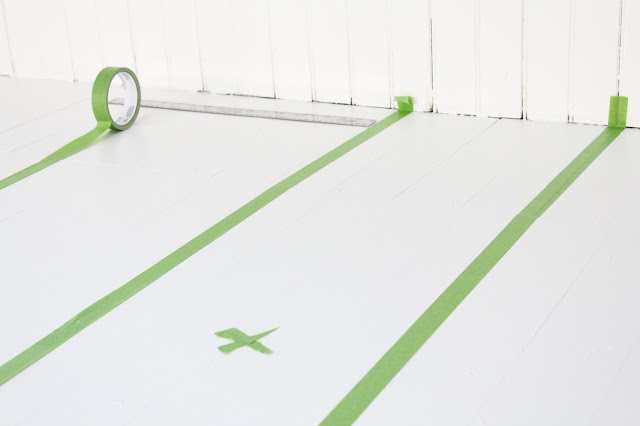 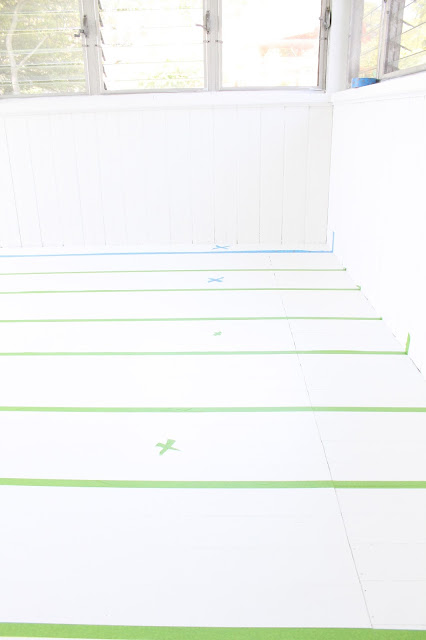 I then sealed down the edges of the tape by running my finger along the side to make sure it was down securely with no bubbles. Using a paintbrush I then cut along the wall with my gray paint. This way I avoided having to bring my roller brush close to my crisp white walls! 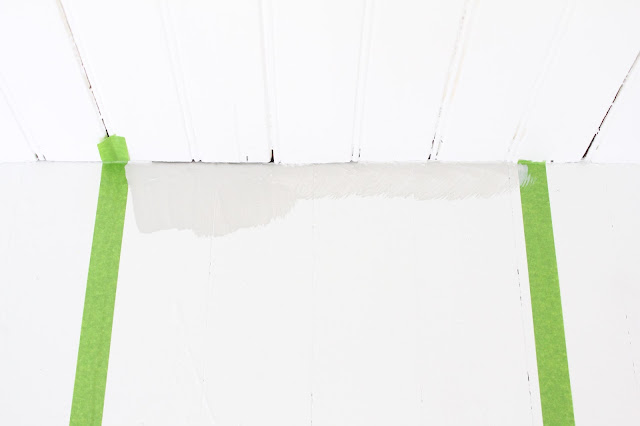 Tip Number Three for painting stripes is a great one. I filled two small containers with both my paint colors with separate foam rollers for each color. Using one roller I begin painting over the area at the edge of my painters tape with the original floor color, Benjamin Moore’s Decorator’s White. Right away I painted my entire stripe with two coats of the Coventry Gray and then immediately pulled the painters tape off. I was left with a crisp and clean line. By doing this, the first paint color around your painters tape is your base color. Any seepage that happens will be with this color. You are basically sealing the color in. Once you paint your stripe color it will be over the newly applied base color and over your painters tape, leaving you a perfect clean line. 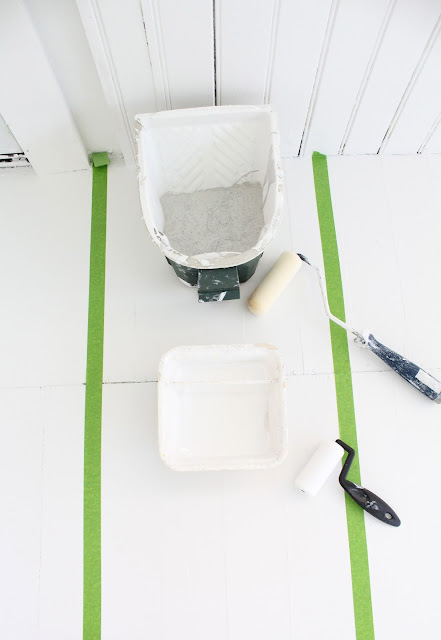 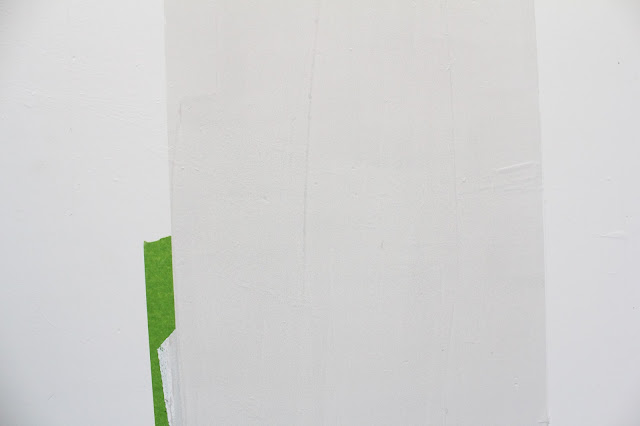 I painted one stripe at a time. The consolidated version is as follows…cut at the wall first, then one layer of my base color (just at my tape lines) and then two layers of my stripe color. I then pulled the tape off and moved on to my next stripe. 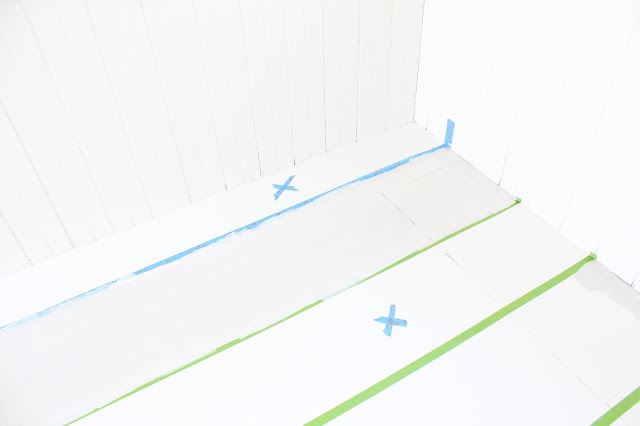 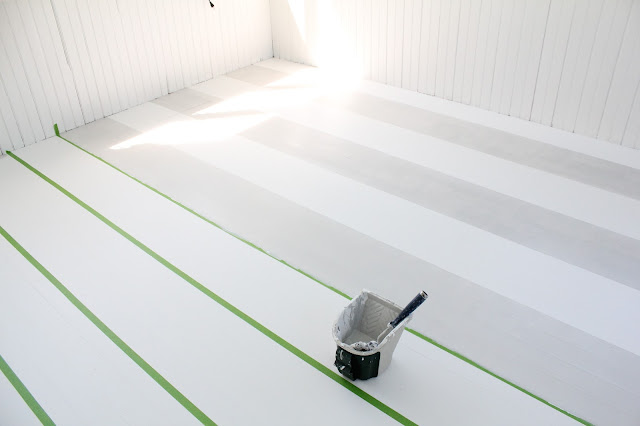 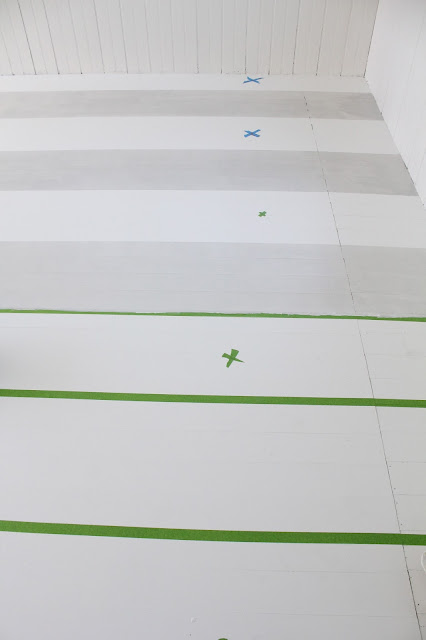 Once the whole room was done I let it dry for 24 hours. 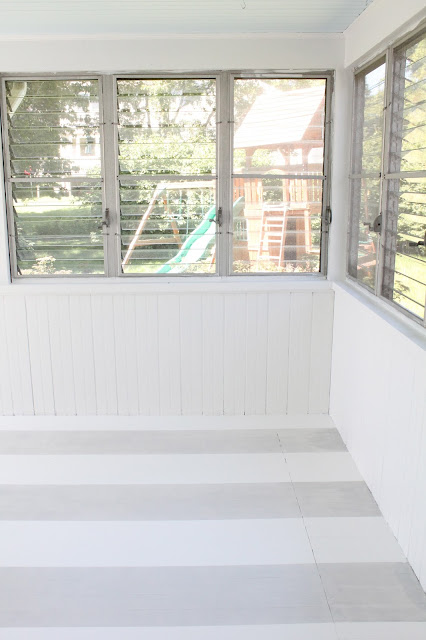 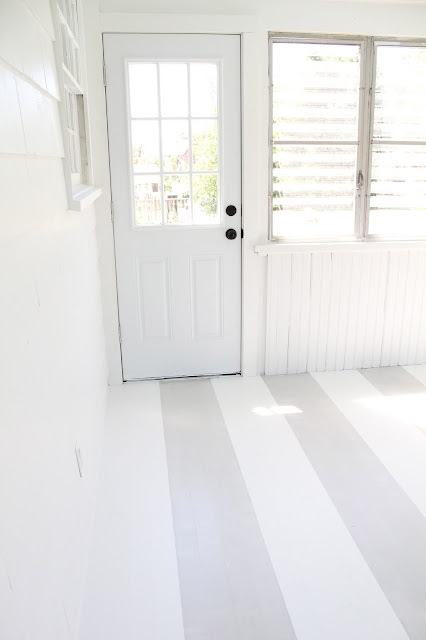 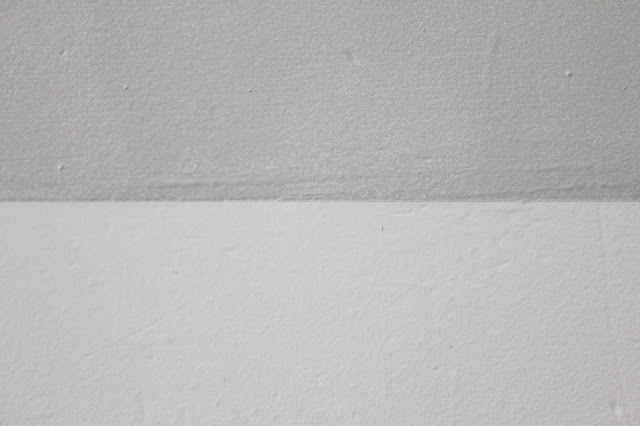 The next morning I decided that my stripes needed a bit more coverage so I did some touch up painting.  I stayed away from my edges but filled each stripe for more opaque coverage. Below you can see the stripe all the way to the right is finished. 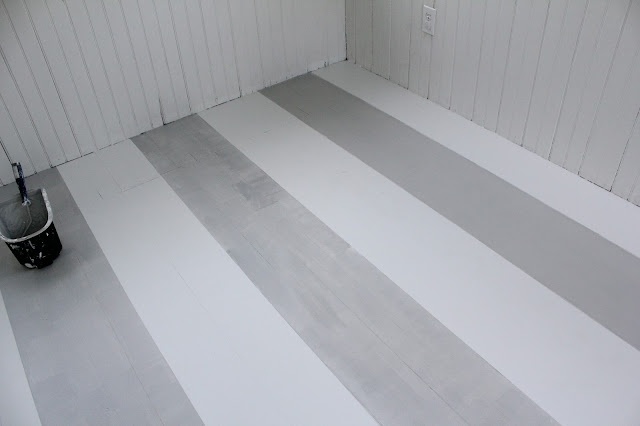 Twenty minutes later and my touch ups were done. Another 24 hours after that and my striped floors are done. 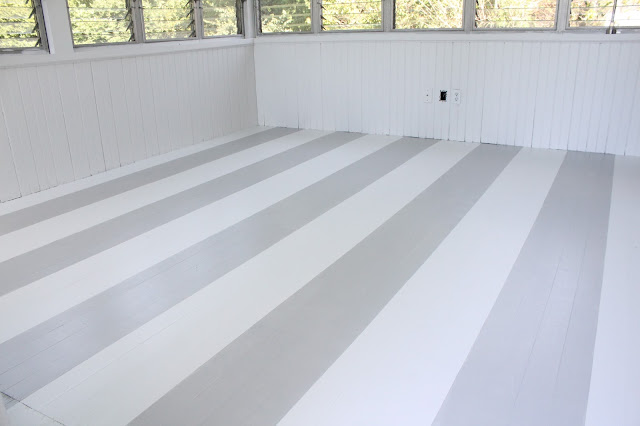 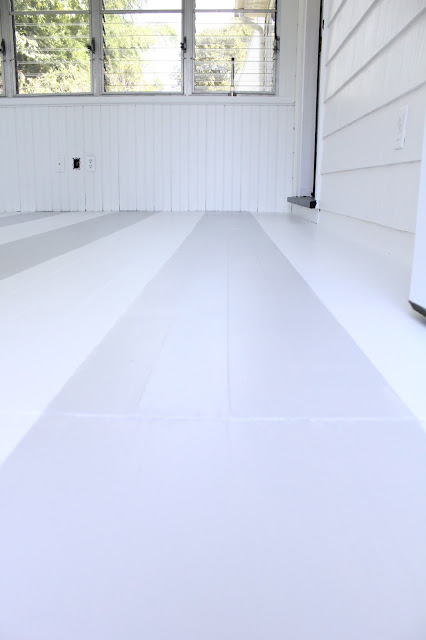 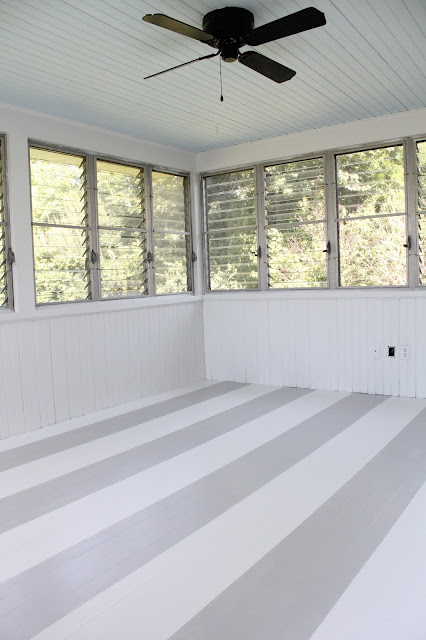 A lot of the same techniques could be used if you decide to paint stripes on your walls as well. Sealing the painters tape with the base color was a great one in my book. It was altogether quite a process but mostly because of the various layers. Waiting 24 hours between each coat was tough to stick out since I am not the most patient person. It paid off in the end. The effect of the stripes on the floor is definitely worth it.  I’m so glad it came out the way I pictured it in my head!

linking up with:
Tatertots and Jello
Thrifty Decor Chick